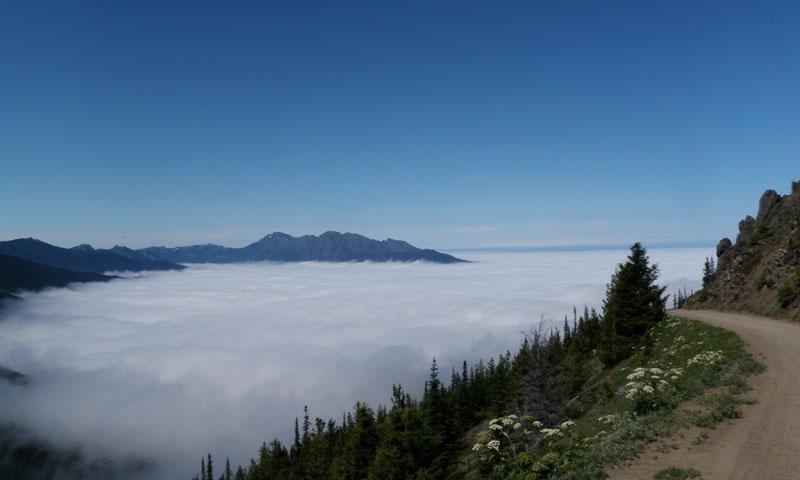 Deer Park Road leads to some of the most beautiful views in Olympic National Park. This 18 mile long road is uphill, steep, and unpaved at some points. It should only be attempted in good weather by SUVs. The various trails that Deer Park Road access lead into the Olympic Mountains. The upper portion of Deer Park Road is often closed between between October and April.

Why should I drive Deer Park Road?

Natural History: The meadows of this region have plants and creatures that cannot be found anywhere else in the world. This area of the park is in the “rainshadow” of the Olympic Mountain range. It is typically drier and warmer than other sides of the park. The meadows were created during the last ice age (which ended approximately 15,000 years ago) and when the valleys of the Olympic Peninsula were covered in glaciers. Being in the rainshadow, this region was an island sticking out amongst the ice. In Deer Park visitors will see endemic species such as Olympic marmot, Piper's bellflower, Olympic chipmunk, Flett's violet, and the Olympic torrent salamander. The meadows are very fragile, but can be enjoyed on the various trails that wind through the area. Visitors are likely to have sightings of deer and mountain goats in this region, but should remember to keep a respectful distance.

Rain Shadow Loop: The Rain Shadow Loop is a ½ mile trail that circles the peak of Blue Mountain, allowing hikers to get a full 360 degree view of the northern region of Olympic National Park. If possible, take this walk at dusk. The clouds come in from the Pacific and fill the valley below, making it seem as though you can walk on the clouds to the glacier peaks of the Olympic Mountains.

Three Forks: One of the more difficult trails in the park, Three Forks is 4 ½ miles of very steep trail. The trail is a “backwards” trail that heads up over a mountain and then down into the valleys of Olympic Mountains. Near the end of this trail is beautiful Cameron Creek. The melted snows flow through Cameron Creek and its many waterfalls, giving it a beautiful clear, deep blue color.

Deer Ridge: Beginning at Three Fork Trail, Deer Ridge Trail is 4.5 miles long and ends at Slab Camp. Deer Ridge is ranked as “moderate” on the difficulty scale and leads hikers through meadows and beautiful alpine trees. On this trail, visitors are likely to meet mountain goats, deer, and elk. This trail features beautiful wildflowers in the summer and amazing views of the alpine leaves changing colors in the autumn.

Where does the Deer Park Road begin and end?

Deer Park Road begins at Olympic Highway, WA-101, approximately 5 miles east of the town of Port Angeles. The Deer Park Cinema sign can be seen at the head of Deer Park Road. Deer Park Road ends at the trailhead of the Rain Shadow Trail.

How long does Deer Park Road take to drive?

Deer Park Road is 18 miles long. The road is an uphill drive, therefore the road is fairly steep and very narrow. The last eight miles of the road are gravel. There are a number of sharp turns and dangerous ledges. Because of these conditions Deer Park Road should only be driven by vehicles able to handle these conditions (i.e. an SUV) and only in decent weather. This road is often closed by Olympic National Park between October and April. This road takes guts, but if you have the vehicle, bravery, and weather on your side, the scenery at the top will be well worth the trouble.